About the Turtle logo 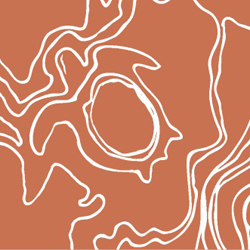 The logo represents the topographical lines that indicate landscape features on a map. The Turtle depicted in the logo is inspired by an experience I had one day in the early 1990s, which had a profound impact on me and my understanding of how Indigenous people view and relate to land.

On that day, an Aboriginal elder who I worked with came to see me in a very distressed state. It took me considerable time to understand why he was so upset. He told me that, ‘They stolen it!’.

I asked what had been stolen.

Although I was listening intently to what he was saying, and was experiencing his emotions, as he was very dear to me, it still took my westernised brain a while to process such a foreign concept.

A sacred object that had been housed in the elder’s traditional lands since the Dreamtime had been lost, and that loss meant that the elder (and his people) could no longer worship it, visit it, identify with it or teach their children about the importance of it. The sacred object that the elder was distressed about was a large rock in the shape of a turtle, which someone had come across and subsequently taken away in a truck, presumably unaware of the dire consequences of removing it.